To Buy Or Not To Buy ? that is not the question 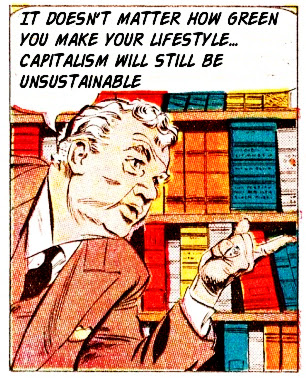 It’s tough being environmentally conscious – you order takeaways that comes in plastic containers; you have a craving to eat meat; you drive your car instead of bicycling to work because it was raining. All reasons to maybe feel guilty.

Yet we shouldn’t be so hard on ourselves, rather we should save our scorn for the system that inflicts environmentally damaging things and situations on us. The emphasis on individual action leaves people concerned about everyday activities that they can often barely avoid doing because of the fossil fuel-dependent system we live in.  If we want to function in this society, we have no choice but to participate in that system.

It is understandable why people may feel guilt though.  Scientists and politicians keep warning us that we are the ones causing climate collapse. Check out the New Zealand Government’s abysmal video they released for World Environment Day.  They make no bones about it being all our fault and we are the ones who need to get us out of this mess by consuming greener (not less though), produce less waste (but don’t stop buying stuff) and plant trees (although we guess if you are renting you will have to ask for the landlord’s permission first).

Of course people want to do something though, and of course we should make lifestyle changes where we can, but the narrative that it is down to the individuals is harmful to the growing movement against climate collapse, and plays into the hands of the ruling class by diverting our gaze from them to our own navels. This narrative tells us climate collapse is our fault, and could be avoided, or at least lessened, if we eat less meat, use fewer plastic, or drive an electric car.

This belief that tweaking our consumer habits is all that is needed is not only wrong – it’s dangerous. It turns environmentalism into an individual choice putting shame on those who don’t have the knowledge, the resources, or the ability to uphold the correct standards. It’s divisive and will deter people from offering support when they may otherwise do so.  It raises a barrier to the entrance to the climate protest movement, often pricing out people on a low income.

While we’re challenging each other’s environmental credentials, we let governments and companies completely off the hook. The fact is that the vast majority of global greenhouse gas emissions come from just a handful of corporations, aided and abetted by the world’s governments. We need to let go of the idea that it’s all of our individual faults, and take on the collective responsibility of holding the true culprits accountable.

So what can we actually do about climate change?  We admit that the worst thing you can do about climate change is nothing. Climate collapse is here now, and a problem that’s only going to get worse, and we have to be willing to make sacrifices not only for our own sakes but for those of  future generations.

At the same time, though, if in focussing on individual action we neglect to look for systemic change, then we are guilty of not looking properly for the correct solutions. There is a danger that personal actions can be meaningful starting points, but then go no further.

We need to broaden our definition of personal action beyond what we buy or use. We need to start holding the corporations and governments responsible and make demands on them to change and compensate the world for the damage they have done to it.

Look at your personal lifestyle changes, but then look further and magnify them into something bigger than what kind of bag you use to carry your groceries home.  It’s not just about what we consume but more about how it’s produced.